Shortly after a government mandated extended Bayram holiday in September, our school had another one-week holiday in October. I toyed with many a travel idea. As the break approached, I was still without reservations. I found myself hesitating simply because I wasn’t in the mood to travel alone.

Sure enough, vacation arrived and I never made any plans. That Saturday morning, I finally decided to just book a ticket for that evening to Trabzon on the Black Sea coast in Northeastern Turkey.

I stayed at the TS Park Hotel right in the center by Ataturk park (around 50 USD per night). It was very easy to find. I took the Havatas from the airport headed towards the Meydana (5 TL). I had to wait awhile for the bus to leave, but once it left, I was surprised how quickly we got into town.

My days in Trabzon were uneventful. It was raining the entire time and I had caught a cold, so I didn’t bother exploring nearby towns on day trips or up to Boztepe for the view. Even Sumela Monastary, the biggest attraction in the region, was closed for renovations. Moral of the story is to go when the weather is more cooperative.

On my first day I walked along the Black Sea. Had the weather been nicer, there were several places I’m sure I would have enjoyed sitting down at for a tea. The wind was howling, though, so I had to to cover my head with my scarf to protect my ears. On the way back, it was very obvious a man was following me. I’ve never had that happen in all my travels throughout Turkey so far.

I was approaching a pedestrian bridge to cross the highway. When he saw me coming, he slowed his pace and waited for me to pass him. There were quite a few people around, so I wasn’t too worried, but I’m sure he knew the area better than I did. Perhaps I was walking towards a more secluded area where he could take advantage of me somehow.

As I approached a park, I made it clear that I noticed him. I made a turn and waited for him to turn as well. I then returned the other direction, looked directly at him, and then set on a nearby bench next to a newspaper bufe. He slowed down, looked back at me, and then continued on his way. I’m thankful it was that easy.

Fellow travellers, please just be aware of your surroundings.

In the coming days, I did a lot of shopping and walking.

I walked all the way to Hagia Sophia where there was some sort of special event occurring. I thought I wasn’t allowed into the mosque, so I stayed outside for a long time. Next thing I knew, swarms of men and school children were munching on a dessert served up by (I’m told) local government officials. The art at the mosque was beautiful, but much of it was covered up. I was just happy to enjoy the view of the sea and accidentally stumble upon the festivities. 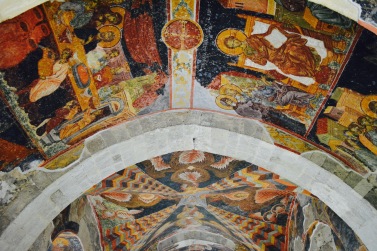 While Trabzon didn’t have much to offer during that season, I did enjoy having the time to shop by myself. At one shop, I was offered the customary tea and then we sat and spoke as much Turkish as I could manage. When I ran out of vocabulary and stood to leave, the man who owned the shop placed a beautiful scarf in my bag.

There were two other shops that I just loved, both run by more traditional Turkish women. I personally love the style of the Muslim women in Turkey. The majority of the women always look so put together, so modest, and still fashionable. At these two shops, I felt like I was their little Western doll. I felt like I had everyone’s attention as I tried on beautiful long jumpers and skirts. At one store, they even taught me how to properly cover my head, a useful skill in that weather.

Throughout my strolls in the central area of Trabzon, I did notice that tavla and nargile cafes were not as obviously present as they are in Istanbul. Tea cafes, sure, but not once did I hear the rhythmic sounds of the tavla pieces slamming down onto the board. As always, I assume I was just wandering the wrong streets.

If you’re from Trabzon, is tavla popular there?

Finally, the food: I ate at Cemil Usta by my hotel twice. It was delicious and the dishes were generous. I don’t recall the names of the other places that I ate at, but Cemil Usta is definitely worth a visit if you’re in Trabzon.