The Mackinac and Bosphorus Bridges

In 2012, my older sister and I went camping with her family in Mackinac, Michigan over Labor Day weekend. Labor Day is the one day every year that Mackinac Bridge, The Might Mac, is opened up to pedestrians for the annual bridge walk.

The bridge itself is FIVE miles long. Just the bridge. Five miles.

Cora, my sister, and I left our campsite early in the morning to take the shuttle over to the Upper Peninsula to begin the walk. As we approached the middle we could feel the bridge sway and see it in the path of the people ahead.

Part of the bridge was solid pavement while the other part was a grid. Cora insisted that we walked on solid pavement. I didn’t think the height of the bridge or seeing the water below was so scary until my shoe came untied. I got so scared tying my shoe that I decided it wasn’t necessary. 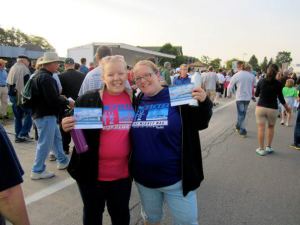 One of my New Year’s Resolutions was to run the 5K part of the Istanbul Marathon. Now, let’s be real. I don’t really run. That said, I had been working with a trainer throughout the year and my running was improving, so I thought I would give it a go.

Little did I know, there was an 8K Fun Walk and a 10K race, but no 5K… When I realized this, I decided I would just do the 8K Fun Walk.

Regardless which distance you decide to tackle, the race takes you across the Bosphorus Bridge by foot. Like the Might Mac, this is only permitted once a year. All I wanted to do was go across the bridge by foot.That was my sole purpose for dreaming up the idea of running a 5K to begin with.

Unfortunately, by the time I registered, the Fun Walk was full. Determined to go across the bridge by foot, I signed up for the 10K. I thought, “I could still try to run 5 and walk the other 5…”

When I picked up my runner’s pack, I started to understand the race energy that all my running friends always talked about. Everyone was so positive. I thought, “Maybe I really COULD run this…” At that point though, my training had stopped and I was ill prepared for the race.

My goal of running a 5K reduced to running 2K and then again to, “I’ll just run across the bridge.”

You see how committed I was running? It was never about racing. It was always about the bridge.

Sure enough, when race day came, I was bouncing with excitement. When the gun fired, we all made our way across the start line…

I started jogging a little…and then I realized I wasn’t getting anywhere… Very few people were running.

Everyone stopped to take pictures along the bridge. Naturally, I decided to do the same… And thus my statement that I would just run across the bridge became, “I’ll jog when I feel like it…”

I felt like the 10K really moved along till I reached the 8K finish line. The last 2K were a killer. At that point, I was tired, hungry, and thirsty. Luckily, when I crossed the 10K finish line, I got a snack, drank some water, and sat down for some balik ekmek.

I’m glad I got to add this to my Istanbul experiences, but since I’m not a runner, I don’t know if I need to do it again. But maybe there’s another big, beautiful bridge calling my name…