When it came time to plan my February holiday, I thought, “What does one do for a holiday in February when one does not ski?” I’m from Chicago, afterall, and mine was not the go-to-Colorado-to-ski type of family. Winter holidays? What are those? I tried skiing when I lived in Austria. I’ll likely never do it again.

Likewise, I considered where I wouldn’t mind visiting as a solo traveler since I didn’t plan on anyone joining me this time around. I decided that I would love to learn to dive and recalled that several of my colleagues are divers. After asking around, many of them recommended Dahab, Egypt. Sharm El Sheikh is the more well known hub of the Sinai region, but it is also more commercial, expensive, and built up for tourism. Dahab was a Bedouin fishing village later settled by a bunch of hippies. It is one of those places where you go to dive and end up staying a lifetime.

After booking my flights and making all my arrangements with H20 Divers, my friend Kyndall decided to join me. Despite experiencing Dahab with a buddy, I feel confident in saying that Dahab is perfect for solo travellers as well.

I chose to dive with H20 Divers based on a recommendation. I opted for the PADI Open Water course. It was about 350 euros and worth every penny. Between the classroom time, confined dives, and open dives, our days were long. Our instructor, Frank, was a real character. He admits he is a bit of a drill sergeant and the man can talk for days at a time without stopping for a breath. He may get in your face a little, but it’s only because he is very passionate about diving and he doesn’t want to see you quit.

We flew direct from Istanbul to Sharm El Sheikh with Turkish Airlines. As Americans, we don’t need a visa for the Sinai peninsula. If you plan to travel outside Sinai, make sure you get a visa ($25 in the airport). Without a visa, travel in Sinai is limited to 15 days.

As we walked towards baggage claim, an officer checked our passports once more. We were told we were very beautiful and asked if we had husbands, to which we responded yes to avoid any additional questioning. “Yep.  We’re back in Egypt,” Kyndall said. Our light hair and eyes often bring us unwelcome attention. Fortunately, that was the last of it for this trip… Except for the one guy who asked me why I was so white. Literally. All I could think about was that quote from Mean Girls. “Oh my God, Karen, you can’t just ask people why they’re white.” Classic.

H2O Divers arranged a private transfer for us (25 Euros each way). Our driver met us outside the airport and drove us directly to our villa in Dahab. The air was brisker than I had expected. As we drove in the night, we could only see the soft silhouette of the mountains under the stars. Between Sharm and Dahab, there were two passport checks. As officers waited for cars to pass through, they warmed themselves by a small fire.

After some much needed rest, we began our journey from the villa to the bay. With no agenda in mind, we made our way slowly. We stopped at a small store selling natural creams and essential oils called Back to Nature. We smelled all the smells, had a delightful tea, then made our way into Assalah Square for our first of many falafel sandwiches. If you want a good falafel, Al-Ekhlas is your place. Each falafel sandwich was only 4 Egyptian pounds.

We crossed over and continued on the side streets along gravel roads.

We cut over by the water at Eel Garden and quickly asked the exiting divers about the water conditions; 21C. 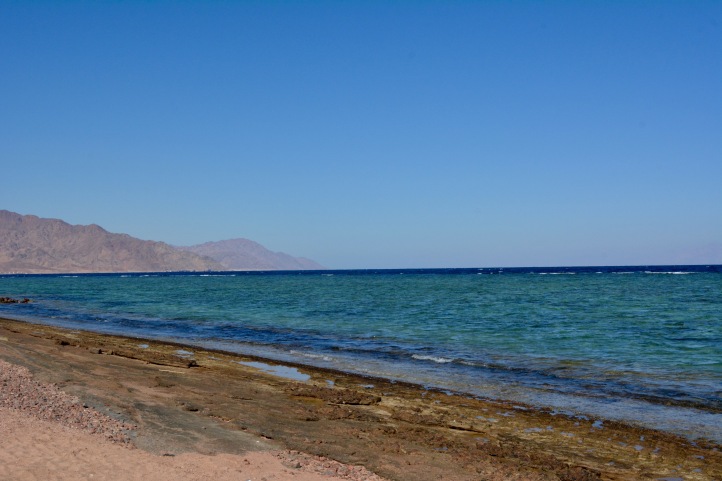 Following the path along the water to the bay you’ll notice the hotel ruins from Dahab’s glory days that are now the playground for young Russian and Bedouin children. After the revolution in 2011, the Egyptian pound has lost a great deal of value and tourists have stopped visiting, a story we heard often during our trip through Egypt in 2015.

When we arrived at H2O Divers, we were asked to start watching the video that accompanies the first chapter of the PADI Open Water course. It wasn’t part of our plan for the day, but sure, why not? When we finished our chapter, we perused the local shops. We got the usual beckoning, “come see my shop,” but I was pleased with how many places we could stroll through leisurely without any hassle. In fact, one shop was called No Hassle 2. I can’t remember his name, but the guy holding down the fort was very laid back, offered us a tea, and just enjoyed our company. There was a German woman inside that we spoke with for quite awhile and he didn’t mind at all. It was nice to be social in a store rather than feeling rushed or watched.

We met a few other wonderful people throughout the week in the shops and at restaurants. I recommend “Same Same But Different” just past the bridge on the left for a relaxing environment. The guy serving us was incredibly accommodating. The artist at a papyrus shop up towards Yum Yum’s (another falafel place) looked through everything he had to help me find something specific. Finally, Maysara, a young man in the last shop on the right just before the bridge sells beautiful handmade tapestries. His were the best around and we saw him working on some himself. He was just the kind of gentleman from whom you’d want to buy.

On our way back to the Villa, we stopped at a little place called Mama’s Koshari for dinner. There was a young man, very polite, early twenties, serving up bowls of Egypt’s famous dish. More than anything else, I savoured the simplicity of the atmosphere and the peaceful people watching. Kyndall and I sat at one of the four low tables with cushions on the floor devouring every last bite. I tried to find my breaking point as I gradually added their spicy oil to my dish. I had completely underestimated the power of this oil last time I was in Egypt, so I didn’t want to overdo it and ruin a perfectly good meal.

Over the next four days, I completed the PADI Open Water course with Frank at H2O Divers. To read about my underwater journey, click here.

When we finished our course, we took Frank out for a thank-you drink and then enjoyed an INCREDIBLE feast at Baba Ali’s for only 110 pounds per person. Do not miss the opportunity to eat there. Make a reservation so that he can have your food prepared. It’s also a very small restaurant, so call just in case he is busy. The food just keeps coming.

Frank encouraged us to use our last two days to go on more dives. Given that we also wanted to hike Mount Sinai, we would only be able to fit in one dive on Friday morning since we were flying early Saturday morning. Kyndall had decided not to do another dive, but I was on the fence. When Friday arrived, I simply couldn’t do it. After diving all week, hiking Mount Sinai, and taking a fall, everything hurt.

On Friday morning, I woke up early enough to enjoy the sunrise. 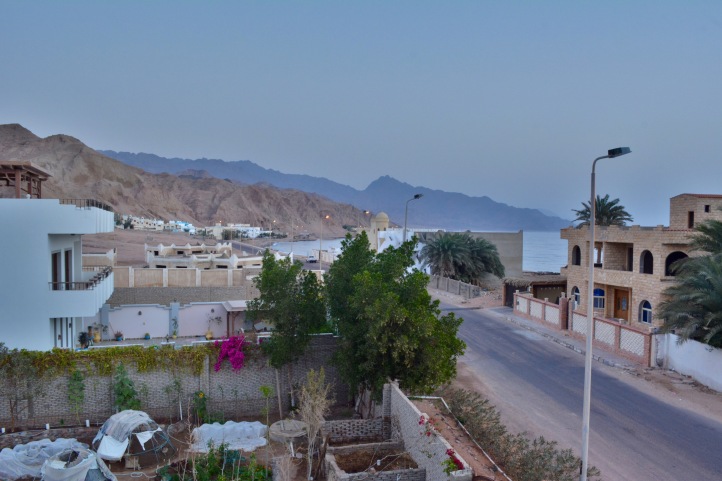 I sat by the pool at the villa after breakfast to read. A passage from “Turn Right at Machu Picchu” resonated with me due to the aches my body was feeling from hiking and managing my dive equipment:

“At the top of the ridge, the ground flattened out enough for some enterprising family to have carved out a tiny farm. Here, the mule team stopped to order some chicha, the sour home-brewed corn beer of the Andes. A bowlegged senora waddled out of the house, outfitted in the customary attire of the mountains: stovepipe Stetson, billowing skirt and a hand-made cardigan woven in colors that could stun a deer. She carried a plastic pitcher with a creamy-looking liquid in it. Before anyone could take the first sip, Justo grabbed the vessel and poured out a dribble onto the ground, “for the Pachamama!” — a salute to the Earth Mother.

I declined Justo’s offer of a swig and showed my respect for the Pachamama by lying down in the dirt and embracing her with every traumatized cell in my body.” (Chapter 12, pg. 56)

When I read it to Kyndall, she laughed and said, “It reminds me of when you were stuck on the bottom of the bay!” On day 2 or 3, I got stuck on the sea floor because I hadn’t figured out neutral buoyancy yet. I signalled for everyone to wait. “I’ll figure it out… Gimme a minute…” Two weeks later we are still laughing.

On our final afternoon, we shopped, relaxed, and enjoyed some time with two American girls we met at the dive center. As I sat by the water, I was filled with regret for not diving one more time. I knew my body couldn’t handle it, but my gills were already itching to get back in the sea. 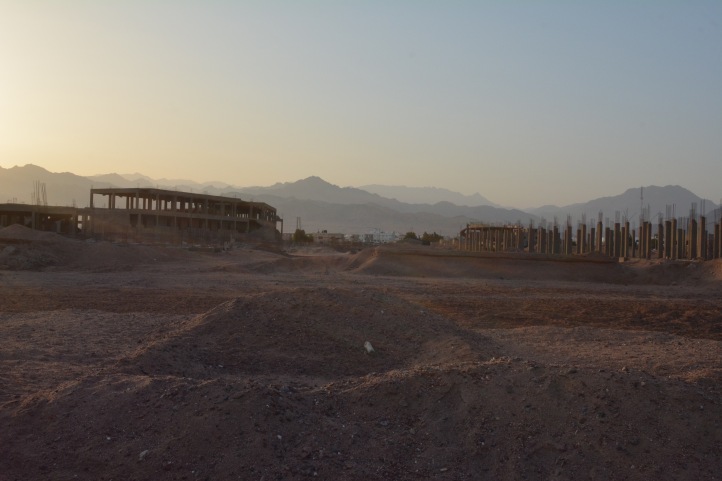