As I was flying over  Eastern Europe yesterday, I was reminded of the night I truly became friends with Julia, Julie, and Laura. We were studying abroad in Salzburg and taking a hiking course together. Our biggest hike included an overnight stay in the Alps.

As the sun set, we wondered, “Is that a cloud or a mountain?” We watched for hours trying to detect any movement that may discern snow caps from fluff in the sky. We gazed at stars for so long that they appeared to be dangling from threads. I had never seen a sky as clear as that night by the hut in the Alps. We snuggled up and laughed in the cool mountain air.

We never went back to that mountain like we said we would, but I hope we will. There is still time. She is still waiting for us.

As I flew over the mountains, I found myself thinking, “Is that a cloud or a snowy lake? Where does one end and the other begin? How can a mountain, with all her grandeur, seem so small from my vantage point on a plane?” 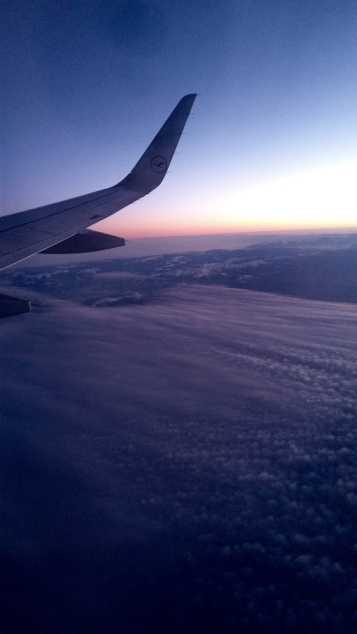 I was amazed by all the shapes the clouds could take; like a head of cauliflower, like a group of worms… At times the clouds themselves formed mountains and valleys. As the sun was rising, the layers of clouds became more evident. Above one table floated another layer, so light, so transparent, ghostlike. Pink ghosts, only to be seen from our seats on the plane, hidden from ground view.  After the sky turned from pinks to blues, the various shades formed the illusion that there was a tidal wave prepared to knock the plane from the sky in a matter of moments.

The route took us over Greenland and down through Canada. I have never had a window seat over Canada during the daylight. The blocks of ice stunned me. While they appeared small, like the mountains from my bird’s eye view, I knew they were larger on the surface than I could truly imagine. Additionally, I couldn’t help but wonder how their shapes have changed over time.

I can’t help but be filled with wonder when I travel, especially by nature. It never escapes me that I am so small in this great universe and so blessed to be able to explore.