The drive from Agra to Jaipur was about five hours. If you look at a map, the two cities don’t look far apart, so when I learned that the drive was five hours, suddenly the size of India seemed larger than I ever realized.

We spent three full days in Jaipur and loved it.

I highly recommend Zostel. The bed was probably the best hostel bed I’ve ever slept in and the common area and kitchen truly welcomed socializing, comfort, and a cozy place to reflect and journal. There were also TVs, games, and books. It is within walking distance to the bazaars, the Wind Palace, and the City Palace. I believe it cost roughly $10 each per night. 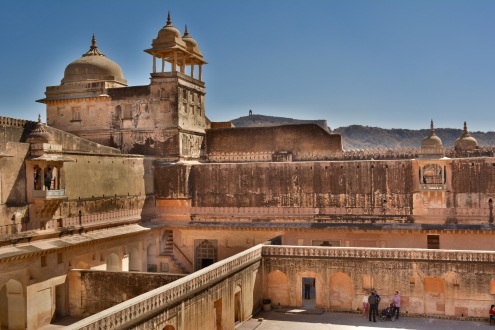 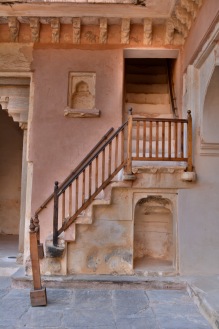 Our first stop was the Amer Fort. We got a combined entrance ticket that included several sites for 48 hours. I don’t remember what the cost was but I recall it being worth it. Even cheaper for students.

It was a maze. The views of the city wall, of Jaigarh Fort up above, and all the beautiful courtyards were incredible. There was a temple inside the fort. We went in and watched people make offerings and ring the bell as loudly as they could. One of the things I love most is that it’s not all heavily restored. I want buildings to be preserved and taken care of, but I also like when you can see that a building has aged.

For more detailed information on Amer Fort, check out this post from RemoteTraveler.

We were told there was a way to walk to Jaigarh Fort. The only way we saw was by tunnel, which was sadly closed off part way through. We thought there would be a way to walk above ground, but when we met our driver outside to tell him that’s what we wanted to do, he recommended we do it another day, probably because we took longer than planned in Amer Fort. It was midday, so there’d also be no protection from the sun walking between forts.

On our way down, we stopped to see the floating palace, Jal Mahal. I was more impressed by the people watching. 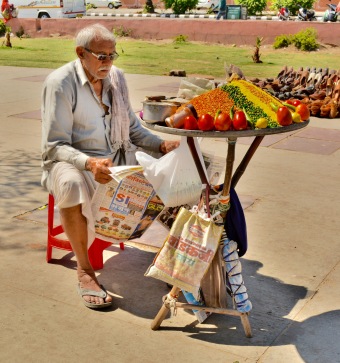 If you have a driver, he will probably try to take you to some shops where I can only assume he will receive a commission. If you’re not interested, just say so. Our next stop was a jewelry factory. I was not impressed there, but I was also not looking to purchase fine, expensive stones.

Afterwards, we went for lunch where I ate spicey chickpeas, garlic and cheese naan and fruit raita (yogurt). I was still Dehli-Belly-free at this point, but Sam had gotten sick the night before. We assume it was from the beer she had, because otherwise we were all eating pretty much the same things.

Our driver was taking us to restaurants to eat. We told him we’d like to find someplace cheaper because we can’t imagine that Indians pay what we are paying. That said, we were also cautious of street food, which is definitely the cheapest route, because we were scared of getting sick. At one point in Jaipur, we walked into a restaurant, looked at the menu, decided it was too much money and that we wanted to go back to a restaurant just a minute away that we had previously eaten. Since this place was empty, the man up front tried to lower the price to get us to stay. As we walked out, he seemed to be yelling at our driver. Our driver just shrugged like, “What can I do?” 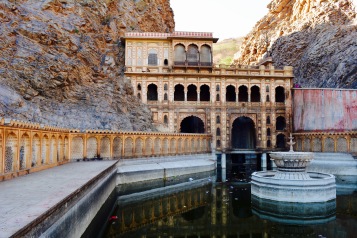 Entrance is free, but they charged us either 100 or 150 rupees, very insistently, for taking photos. They tried to charge us per camera, so we took my camera inside and put Sam’s back in the car. Kyndall kept her phone with her. Once inside, no one is there to check to see if you paid to take pictures, but there is another guy that tried to charge entrance for something. I said no because his sign was not even in English, which I figured was a scam for a major tourist attraction. Sure enough, he did not put up a fight when we walked right passed him.

Monkeys were everywhere. Flying, playing, splashing in the water, climbing… Some were a bit aggressive, but it was neat to see them in that setting. It was easier to get pictures of the Monkeys in Hong Kong on Monkey Mountain, but it was more interesting to watch the monkeys here in Jaipur. What saddened me is that the Temple grounds are not well kempt. There is litter everywhere. 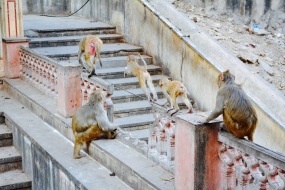 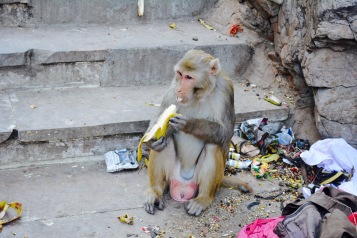 We saw a couple people washing themselves in the water, which was filthy. Either that water is considered holy or that’s the only option they must have. We also saw a man who seems to have taken in upon himself to bring bananas to all the monkeys. They say not to keep any food in your bag when you go to Monkey Temple because the monkeys will just pounce you. I wondered if he had ever been ganged up on…

When we thought it was starting to get dark, we walked out to our driver. He recommended that we hike up to the Sun Temple to watch the sunset. We had to walk back up through the Monkey Temple to get to the Sun Temple. As we entered the grounds for Monkey Temple, we were asked to pay for our cameras again. He had given us a receipt, but we didn’t bother to get it out as we waved him off and told him we already paid.

The sun took its time setting that night. We really enjoyed the view, counting monkeys on rooftops, watching children play football, and seeing the vibrant colors of the buildings take life.

On the way out, we swerved around a lot of cows, as one does in India, and we stopped at a garden. I never wrote down the name, but it’s included in the combination ticket. It was lovely, but they were having electrical problems, so none of the lights worked. It would have been better to see it before going to Monkey Temple.

Our last stop for the day was to a shop called Royal Spices and Tea. The guys running the shop are friendly and fun. It’s really low pressure. They have you smell all the spices and taste several teas. We had a good laugh over product number 69, which just happened to be a “love tea.” It’s like viagra for men and women. You mix a teaspoon or so in with a warm glass of milk and voila! Better sex for everyone!

I’m pretty ignorant when it comes to what is considered a fair price for tea and spices, especially when you consider quality and what is local (and should therefore be cheaper). That said, I didn’t think the prices were bad, and I am willing to pay for a positive experience. If you’re looking for a nice experience and little exposure to something you may or may not know much about, I recommend this shop. 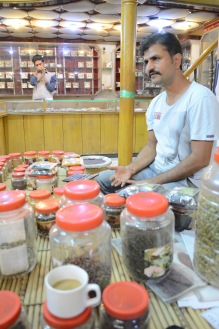 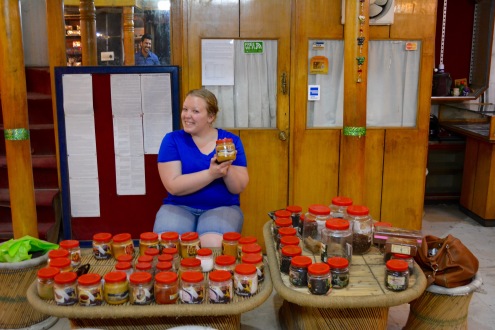 When our driver dropped us off at our hostel that night, we hopped across the street to the Himalaya store. Kyndall loves their soap, as was made evident during our trip to Egypt. I couldn’t believe how cheap the products were in India! A peel-off face mask that I paid 25 TL for in Turkey was only 70 rupees, less than $1, in Jaipur!