The Oracle of Delphi

I wasted no time entering vacation mode at the end of this school year, the end of my FIFTH year as a teacher. #Milestone. The night that school ended, I was on a flight to Athens.

Upon arriving at the airport and going through passport control, I caught the metro (airport price = 10 euros…yipes!) to Omonia where it was then just a short walk to the Best Western Phythagorion. The man at the front desk was very helpful, despite the late hour. He answered all my questions before I could even ask them.

The next morning, I snagged a quick breakfast before my tour to Delphi. I booked a tour because I had tried to catch the bus to Delphi years ago and just couldn’t manage. If you plan to go by bus on your own, I recommend using a taxi instead of the local buses to get to the main bus hub. If you’re going in a group, rent a car. The drive seemed easy and it would definitely be more cost efficient.

I thought the tour was a bit pricey (booking the way I did is definitely the cheapest), but it was really nice to be stress-free. Our guide was energetic, our lunch fantastic, and our tour more informative than I could have managed on my own.

I’ve seen a lot of ruins. I’ve been to a lot of museums. I always think going on my own is enough, but tours are almost always better because I LOVE learning, especially mythology, and you get where you are going faster. I’m just too cheap to do them more often, and I definitely couldn’t afford them when I was in college.

So, why did I want to visit Delphi? The setting.

It was believed this spot was the center of the universe.

People travelled long distances to have their fortune, however vague or two-sided, told by the Pythia, which people now believe was made possible through natural hallucinogenic gases found under the temple.

After our tour, we had some time to explore the ruins on our own. Then we had a tour of the museum before heading off to lunch, where we had this view: 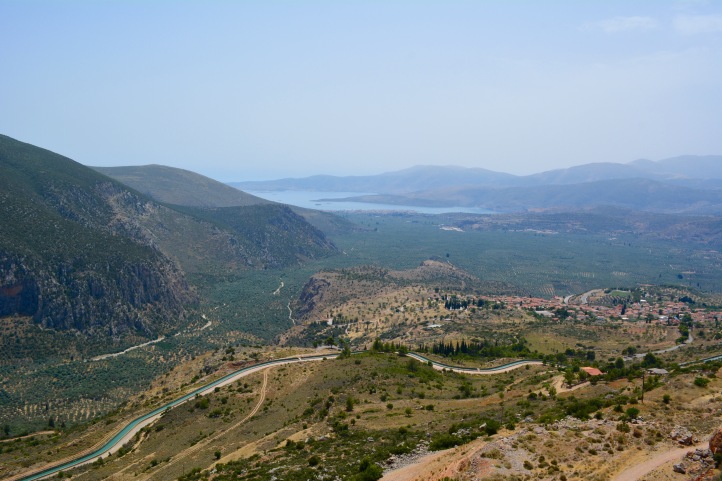 We made a quick stop (really, WAY too quick) in Arachova:

When we got back to Athens, I got out by the entrance to the Acropolis and explored for a bit before returning to the hotel to collect my bag and catch my next flight: