There’s More to Agra Than the Taj Mahal

I read time and time again that it wasn’t worth staying in Agra more than a day. Everything basically said, “See the Taj and leave.”

Maybe it’s because Agra was our first stop in India, but throughout the week, I looked back on Agra as our best place to people watch. It was where I was most disappointed in my chronic “tourist shame” that prevents me from taking more pictures of people going about their day-to-day lives.

I was fascinated by:

…Children practicing their ABCs with chalk on an old brown door.
…People carrying giant jugs of water long distances by hand or motorbike.
…One-stool barber shops set up anywhere there was a hole in the wall… Or just anywhere they could lean a mirror.
…Monkeys climbing walls.
…More colors on fabric than you have ever seen being washed in the river by hand.
…A young man ironing clothes on the side of the road.
…A small modesty cloth wrapped around his waste as a man bathed in the middle of town using only a small bucket of water.

While some sights became commonplace by the end of our trip, such as a cow on every corner, there was something so natural about Agra that I didn’t feel in Delhi or Jaipur. When you go, give yourself time to explore Agra beyond the Taj Mahal. For instance, I wish I did more walking around the village across the river.

When we arrived on Saturday, we ate a delicious homemade stew at the Aman Homestay (highly recommended) and then promptly fell into a nap. That evening, we decided to go to the cheesy Taj Mahal love story show. When I say cheesy, I really mean it. It was SO scripted to be perfectly timed, leaving the performance feeling forced and over acted. That said, the music and dancing was lively, and the colors, as always in India, were incredible. Fun, but cheesy. I believe it cost 1200 INR. An overpriced tourist attraction, but if you’re staying for an evening, why not.

After the show, Kyndall wanted to try seeing the Taj Mahal lit up. I guess only the moon lights up the Taj, though, as all we heard about the next day was how the Taj looks best in the moonlight. We should have gone across the river for the view, but we didn’t think of that. There was no way to see it on our side of the river at night as entry was not permitted.

On the way back, we followed a crowd of people into a festival. We saw woodwork, tapestries, clothes, tried some food, etc. I doubt that’s always set up there, so we were thrilled. 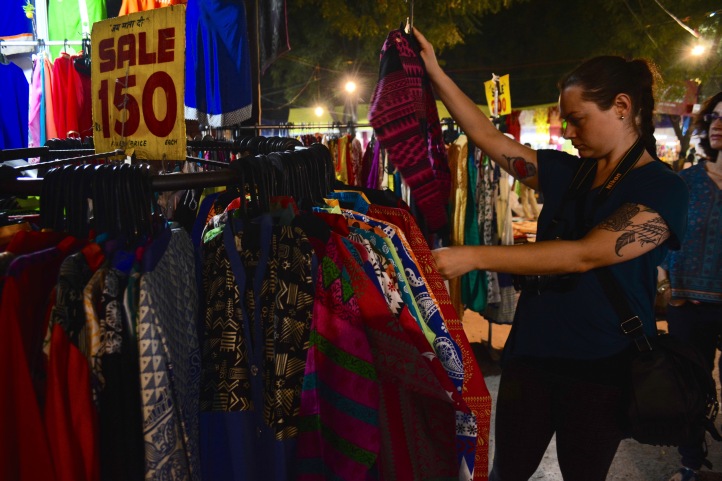 The next morning, we went across the river to the park directly across from the Taj Mahal. 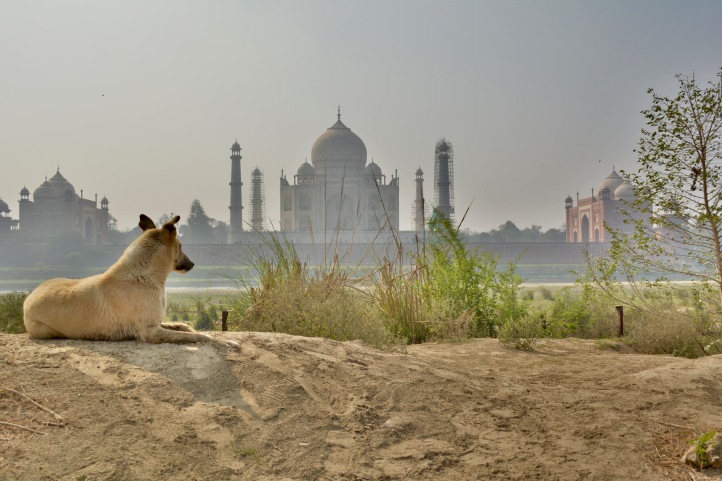 Our guide later told us that this is where the king was going to have his tomb built. His tomb was going to be identical to the Taj Mahal (which he built for his queen), but black. After his death, his son terminated the project and ordered for the king to be buried with his queen at the Taj Mahal. He said it was a waste of money. IF that is true, I think the two tombs standing opposite each other would have been remarkable.

On the way back to the Taj Mahal, we stopped to take pictures along the river. Even at the end of the trip, this to be one of my favorite moments. Each piece was rested in the sun until it was hot before it was washed in the water. 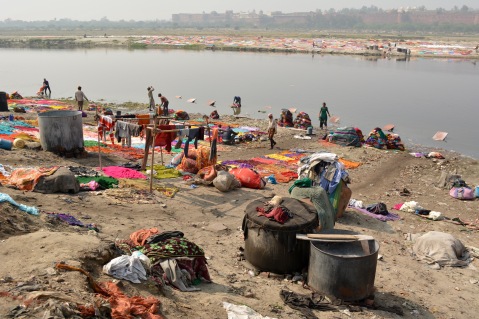 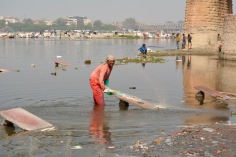 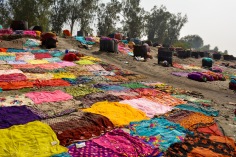 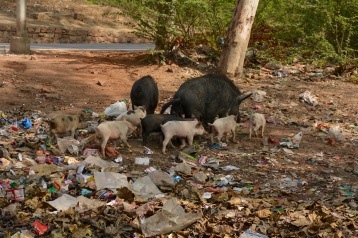 We enjoyed some fresh sugar cane juice by the river as well. 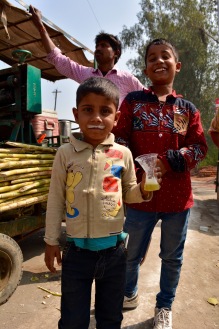 Next, we made our way to the Taj Mahal with our “free” guide that was included with our driver… But a different man than our driver… I’m not sure how that worked… Obviously we tipped him for his time, but was he paid otherwise? Was he licensed? Other than having a cameraman and getting to jump the line to walk into the Taj, I didn’t feel like he was very valuable.

Yes, the Taj Mahal is beautiful (and I wish I had better pictures), but I’m going to admit that I wasn’t that impressed. The sheer thought that all the inlaid work was done by hand and that this grand structure was built of marble before machinery is noteworthy. The gardens, however, weren’t well kept, and it’s obviously flooded with tourists (although they were mostly Indians, surprisingly). That certainly defines the ambiance. The Taj Mahal is so perfectly symmetrical that it almost looks fake. Due to the concentric circle floor plan, it is also quite dark inside. 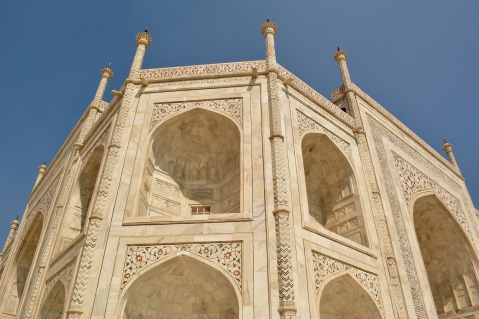 This was also our introduction to how often people wanted their picture with us. Our guide told us that this is because they like our white skin. He said the women in India try to lighten their skin. Men and women both, even if they never had a conversation with us, asked us for a picture together. I found this charming at first and irritating later. Kyndall was aggravated almost immediately. Samantha never minded, but then again, she had no tourist shame and was eager to take pictures with or of the Indian people. I admire her spunk.

Following our tour at the Taj Mahal, we were taken to some factories. One for jewellery to learn about the “Stars of India”, the star ruby and the black onyx, and another to learn about the marble. The stones and gems used in the jewellery and in the marble table tops were lovely, but none of us made a purchase as it was all very expensive and I personally don’t like to deal with shipping.

To learn about the marble process as we did, check out this article I found online.

At the jewellery place, I also got a little drum lesson!

At that point, we made our way to Jaipur.