The remainder of the week, we saw the usual sights. The only place we didn’t get to that I would still like to see is Alexandria. The Egyptians could rattle off about two more weeks worth of sites to see, but I think one week sufficed for me…

First, we had to take an overnight train to Luxor. I’m not convinced that going from Cairo to Luxor should take as long as it did. I mean, look at a map… They’re not THAT far apart. I believe it took approximately 12 hours. If I could do it again, I would fly. The train is a cultural experience, sure, but the flights are cheap and obviously faster.

There were no announcements about where we were each time the train stopped, and despite that this was an overnight train, they never dimmed the lights. It was not the most comfortable night, but I’ve had far more restless nights than I had on this journey. Sure, the train was dirty and the police officers kept warning us that our stuff would be stolen if we didn’t basically sleep on top of everything we brought with us, BUT my chair leaned back further and I had more personally space than I normally get on a long distance train. It could have been worse. I’m sure my travel companions would not agree with me.

At about six in the morning, I couldn’t sleep anymore. I watched out my window as we passed fields of workers walking alongside their donkeys carrying loads of hay and other goods to and fro. It was one of those moments that I wished I were getting a closer look at Egypt. Unfortunately, I feel like most of the images burned into my memory of Egypt were not captured on film.

But hey, that’s part of traveling. And that’s why travelers will never be able to completely explain their fondest moments abroad. I’ve seen some expressive pictures, but pictures often don’t do a place or a memory justice.

I did catch this moment, though: 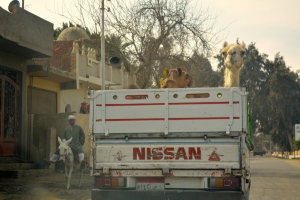 Who doesn’t love seeing a man on a donkey and camels in the back of a truck?

Luxor, and the sights we saw there, was probably my favorite part of this getaway. It wasn’t as polluted as Cairo and it wasn’t as hot as Aswan (which still has nothing on the heat I experienced in Abu Dhabi).

We were supposed to spend one day on the Luxor East Bank and another on the West Bank, but our guide smashed it all into one day. It was a long day, but honestly, we were pleased because it gave us a day to just relax on our cruise boat before we started floating south on the Nile.

In Luxor, we went to…

…Valley of the Kings, which was my FAVORITE likely because it was our first taste of hieroglyphics, but we were not allowed to take any pictures….

…the Temple of Queen Hatshepsut, who apparently knew how to get her way…

…And a brief shot (from the van) of the Colossi of Memnon.

What amazed me most about all these places is that EVERY INCH of space was covered in hieroglyphics. Ancient Egyptians definitely made sure their history and stories would be known throughout future generations. Not only that, but many temples still had traces of color!

On our Nile cruise, I experienced going over a dam on a boat for the first time! I also caught this nice morning shot:

Just as I had on the train, I took a lot of time on the top deck of our little river cruise boat to observe my surroundings. There was plenty of vegetation at times, and yet nothing but rocky structures at other times. The best part was passing villages. Many villagers sat near the water and watched us go by. Children ran to piers to wave and scream hello.

On more than one occasion, villagers paddled out and attached their rowboats to our boat and tried to make sales. They would put a scarf or dress in a plastic bag and throw it up to the top deck and then the buyers would put their money in the bag and drop it back down to the boat… I wonder how much money is in Nile due to poor aim… 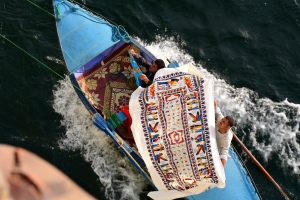 Our next stops were Edfu and Kom Ombo.

After three nights on the Nile, we arrived in Aswan. We left at about four in the morning for Abo Simbal. I slept for most of the three-hour journey awakening to the image of buses caravanning through the desert [AWESOME SIGHT]. Van after van. I imagine there was no safer way to go to Abo Simbal. There was NOTHING on those roads. If you broke down in the desert, you’d be toast.

As we approached Abo Simbal, we passed through a village. I peeked out the window and saw a handful of boys and girls running towards and jumping onto a cart pulled by a donkey. They were heading to school. That moment made me realize just how privileged I really am. 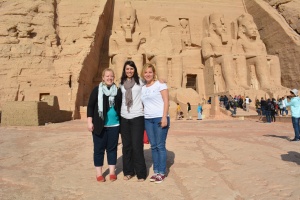 That afternoon, we took a tour of the Aswan High Dam and the Philae Temple.

We ate some falafel and baba ganoush, then boarded the train back to Cairo. On our last day in Cairo, we visited the Egyptian museum, strolled around with Samir, and went back to the shop in the Christian Quarter that I mentioned in “We’re in AFRICA” to get my tapestry.

One of the most charming moments of the week was when a group of school children kept trying to speak English with us and asked if they could take our picture. They all ran towards us when we started snapping pictures of them instead!

Throughout the week, we also spent a lot of time jumping between pharmacies. This fascinated me because pharmacies in Egypt [and Turkey] are more like family businesses. There aren’t nearly as many regulations in these countries as there are in the States. I don’t remember why we went into a pharmacy to begin with, but one of my companions found a soap that they couldn’t find in Turkey, so that kicked off this obsession with finding every bar of that soap located in the country. Later, this spread to a hunt for medications that were more reasonably priced and didn’t require a prescription. Meanwhile, I weighed myself and looked at toothbrushes…

As we returned to the airport that night, I noted two things:

1) I asked our driver, “Why do you always turn off your headlights when we approach a stopped car?” I noticed everyone did it. He told me that it was rude when you are that close to a stopped car to blind the people in front of you. Valid.

2) I really missed Turkey and couldn’t wait to be back. Egypt was nice, but I don’t think it is a country I could have navigated on my own. I’m not completely sure I can navigate Turkey on my own yet, but I have a sense of belonging in Turkey, and it certainly feels more like home than Egypt.